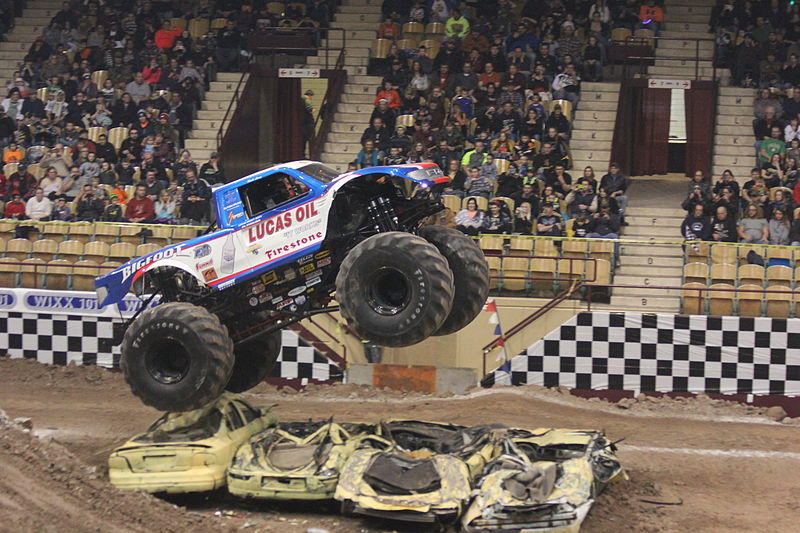 Bigfoot is the real-deal monster. Unlike the legendary and elusive Yeti, this Bigfoot exists. Throughout its history as a monster truck menace, good ole’ Bigfoot has gone through 21 reiterations, has had multiple “rivalries” and single-handedly invented the “monster truck”.

Bob Chandler owned a mechanical shop Ferguson Missouri, due to the lack of replacement parts for his 1974 Ford F-250 4X4, he decided to redesign what he had and created the worlds first “Monster Truck”. The Bigfoot came complete with 66-inch tires and a brand new, massive suspension system. This helped it drive over literally anything. It was noticed by big TV networks and eventually, ESPN picked it up to go alongside Demolition Derby.

During the introductory days of the Monstertruck business, Bob Chandler met with fellow truck enthusiast Everett Jasmer. Jasmer was an avid fan of the 66-inch tire car crushers and decided to make his own. USA-1 was born from a Chevy. The Truck was red white and blue (typical) and the rivalry became the main focus for the media. Both trucks would go on to compete with each other through countless events.

A Clash of Titans

For 30 years these two trucks went head to head. Competing over who could be the most savage and ferocious driver. These two titanic thunder-trucks would go back and forth on victories at countless ESPN events. Car Crushing, long-distance jumping, and height were all but standard at this point in the game. While by this time, other monster trucks had come along, these two remained the most recognizable and favorites of the industry. Only one could dethrone the other, and countless fans were treated to one of the biggest displays of monstrous vehicle antics. To this day, they remain iconic cars and newer Bigfoots are being developed and built upon.

Cancer to Hit Men in the First Place: Health Care

Ram 1500 is Considered an Exceptional Pickup and Thoughtfully Designed