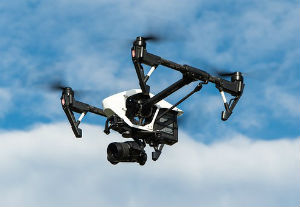 EL PASO, TX – Immigration officials mysteriously spotted a drone flying back and forth between Mexico and the U.S., near the city of El Paso. Border patrol agents say human smugglers used the device. In truth, the drones helped navigate a group of migrants across the border into the United States. That’s right. Migrants used drones to guide them across the border.

Agents spotted the drone using an infrared camera. They did so while monitoring the border in the El Paso area. In fact, agents watched it fly over U.S. soil three times just before a group of 10 migrants illegally crossed the border.

Immediately, border officials seized the caravan of immigrants. Agents swiftly took the migrants into custody. According to officials, this is the first instance of a drone being used as a lookout for people illegally crossing into the country.

Border agents added that over of 360 migrants entered the US illegally near Cristo Rey in Sunland Park, New Mexico. Furthermore, the illegal crossing occurred around 12:50 a.m. Additionally, another 360 migrants reportedly crossed at the Antelope Wells Port of Entry.

In fact, in that section of El Paso, border agents captured over 1,800 illegal immigrants on Tuesday. During processing, agents discovered one of the migrants was a gang member. Agents identified Victor Chavez-Ibarra, a 46-year-old Mexican national, through the computer system. In fact, Chavez was convicted twice before for illegal re-entry into the United States.

Title 42 Under Speculation While Congressional Leaders Are Lost