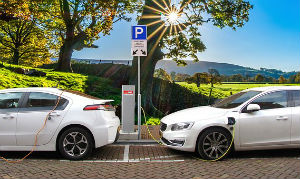 Electric vehicle programs are all the rage these days across the United States. Lately, they’ve been springing up everywhere in the Southwest, nevertheless, the border region has seemingly been reluctant to get on the train with a few outliers here and there.

“Electric is coming, don’t kid yourself,” said Royal Jones, owner and CEO of Mesilla Valley Transportation, which is located in Las Cruces. His company is a six-time recipient of the EPA SmartWay Excellence Award, which is given to businesses who improve freight efficiency and help create cleaner air within their given supply chains.

Jones bluntly explains, “My original reason for being green was because I needed some money.” He went on to elaborate on the reasons for constructing a green fleet. “We like being green, we’re helping keep the air clean.”

The motivation for going green started all the way back in 1982. It was then he realized he was losing money due to the fuel inefficiency of his low-mileage trucks. Jones did the math. He learned that if he could average just one more mile per gallon, he’d actually save roughly 700 gallons of fuel per month. That’s no small amount and really set him down the green path.

Royal Jones, however, isn’t the only trucking CEO, determined to reduce emissions. The number of electric vehicle owners hungry to minimize their carbon footprint. Local dealers near the border are seeing more and more customers looking for electric cars. According to Alex Ledesma, a technology and product specialist at Rudolph Chevrolet, the demand for electric vehicles is going higher and higher.


“People are asking for them. And they want to see them and they want to drive them, so we’re starting to stock them into our inventory,” Ledesma said. Currently, the dealership is selling the Chevy Bolt, an electric subcompact hatchback.

El Paso, however, is behind the rest of the country in the electric vehicle game. Consequently, it’s trying to play catch-up. The city adopted the “Smart City Initiative” in 2018 which focuses on smart energy, mobility, and public services. This initiative will include installing more charging stations around the city. Currently, there are only 12 electric charging stations in El Paso.

So far the usage of the charging stations hasn’t been great but officials are still pushing the initiative.

What do you guys think? Will electric cars catch on in oil dominant El Paso?