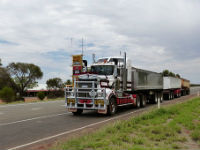 The trucker shortage problem in America doesn’t seem to be going away any time soon. And that’s not a good thing. But even worse, the lack of truck drivers is now going to start impacting consumers.

With freight fees on the rise due to the dwindling driver pool, all kinds of consumer goods could go up in price. McDonald’s Corp’s veteran distributor, Martin-Brower Company, is already upping delivery fees which means that Egg McMuffin you love may not stay at its current price point.

Procter & Gamble Co, Church & Dwight Company and Hasbro Inc. are also signaling that the higher price in freight costs will end up being conveyed on to consumers. That means things like Crest toothpaste, Arm & Hammer cat litter, and My Little Pony figurines could shoot up in price.

Where Are all the Drivers?

But why such a scarcity of truck drivers? According to Darren , CEO and founder of consultant Foodservice Results, “millennials don’t want to drive trucks.” He goes on to elaborate that they’re far more interested in glamorous careers, something tech-oriented.

The shortage of truck drivers didn’t just happen, it’s been an ongoing issue. However, it’s now that retailers are feeling the because this is when annual shipping contracts are renewed. The bottom is that value menu at your favorite fast food restaurant will soon no longer be such a value.

The Problem is Not Going Anywhere

Let’s face it, there’s no easy overnight fix for this issue. Experts at Bloomberg Intelligence speculate that the driver deficit will continue to hurt consumer’s pocketbooks. Plus, none of the potential solutions are ready to make a difference. Autonomous trucks are still way off in the future. Also, if the minimum age for long haul drivers is reduced from 18 to 21, it would barely help. Insurance for these new drivers would be outrageously high.

An attempt is being made to recruit more women drivers, however, the results on that are mixed. Some companies are even turning to rail to minimize spending.

At Amazon freight costs consistently increase at a higher rate than online sales growth. Naturally, they are on the hunt to find cheaper ways to deliver goods.

At Walmart Inc., which owns its own fleet of trucks, it’s sweetening its truck driver package. They’re now offering $1,500 referral bonuses and shortening the hiring process to lure in more drivers.

Finally, at franchisees are reckoning with the fact that the prices they can set, outside of a corporate mandate, are simply going to have to rise.

Genesis G90 Interior is Strong, Vibrant, and Packed with Decadence