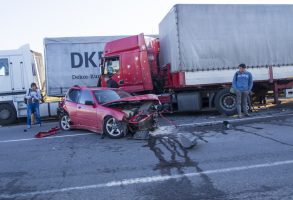 Two people were killed in a hit and run yesterday in Midland County, Texas. The suspect had fled the scene and remained unknown for a period of time.

On Tuesday, July 10, a crash happened on the I-20 around 1 in the afternoon. The location of the accident was near the Farm-to-Market Road 1788.

Texas Department of Public Safety had announced what had led to the accident and the death of two individuals.

A truck driver from Florida, Jose Gilvane Oliveira Baldassari, was driving on East I-20. Ahead of him was lots of backed up traffic from an accident that had occurred on the same day a few hours earlier.

He was not able to slow down or stop, which led to a chain reaction crash. Four other vehicles were affected and damaged by Baldassari’s failure to slow down. It is suspected that he might not have been paying attention.

A pickup truck and a semi-truck were badly affected and damaged by this accident.

Both the driver and passenger, Ricardo n Silva-Martinez, and Bladimir V. Rodriguez, in the pickup truck died instantly after being hit by the truck. Martinez was 27-years-old and Rodriguez was 43.

An unidentified woman was sent to the hospital for life-threatening injuries that were caused by the accident.

MRT news stated that Bladassari left the scene to not be held responsible. However, just a few hours later, the Border Patrol agents in El Paso found him walking by Highway 20. He was trying to find transportation to go to Mexico.

At first, he was arrested for something that was not related to the crash, since the agents did not know. Their intention of arresting him was because he had violated immigration laws.

After they ran his information, the database revealed that Baldassari was wanted for manslaughter in the hit and run.

Gary Painter, Midland County Sheriff warned Baldassari for his actions, stating that this will “ haunt him and will go against him.”

Cancer to Hit Men in the First Place: Health Care