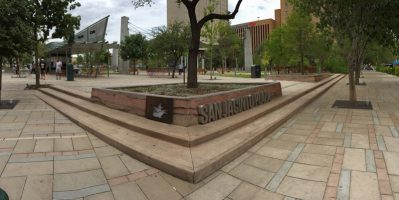 The San Jacinto Plaza will be painting the curbs yellow to notify drives that they are not allowed to park there. The city council approved the modification of traffic codes. They did this to allow the markings of “no parking zones” around the plaza. The city council decided not to use traffic signs to indicate where they are allowed to park. They believe painting the curb is a more efficient way. Many people have been parking around the plaza. This is a traffic lane that was never meant to be parking. in addition, Many police officers have issued several citations. These citations were given to the people who have been parking there illegally. They have decided to regulate traffic and decrease the number of citations given.

By doing so, they will make it a no parking at all times rather than a no stopping or standing/ tow away zone it initially was.  Rudy Pino, the engineering division manager for streets and maintenance believes that painting the curbs yellow is beneficial, He believes it will be more visible rather than putting up a sign. There is over 100 meters of space around the plaza. This includes a 200 car parking structure. This includes about 1,500 parking spaces within a one block radius near the plaza. Pino states that these changes were necessary. They prevented people from parking in a travel lane. It also reduced the risk of ruining the park’s beautiful landscaping.