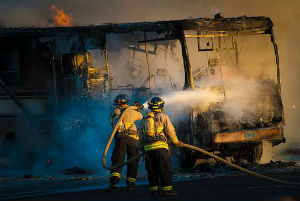 SUNLAND PARK, NM – The owner of a beloved Borderland food truck in Sunland Park, New Mexico, which is just across the border from El Paso, was injured after the vehicle caught fire. It was parked in Sunland Park at the time.

According to the Sunland Park Fire Department, the popular Lazaro’s Tacos food truck went up in flames right around 10 p.m. Prior to reaching out for help, the owner attempted, without success, to put the blazing fire out. Eventually, when it was clear he’d be unable to control it, he called emergency officials.

During his own futile attempts to douse the fire, the owner suffered second-degree burns on one of his arms in the process.

Fire crews relayed that the truck was completely swallowed by flames when they eventually arrived on the scene.

“This is a business that is well-know here in Sunland Park and people from El Paso come to get food from this vendor,” Ramiro Rios of the Sunland Park Fire Department said, “So unfortunately for him, it’s a total loss.”

According to officials, they are guessing the damage will come in around $14,000. Furthermore, they say the reason for the fire is still being investigated by local police. They will provide updates as they emerge.