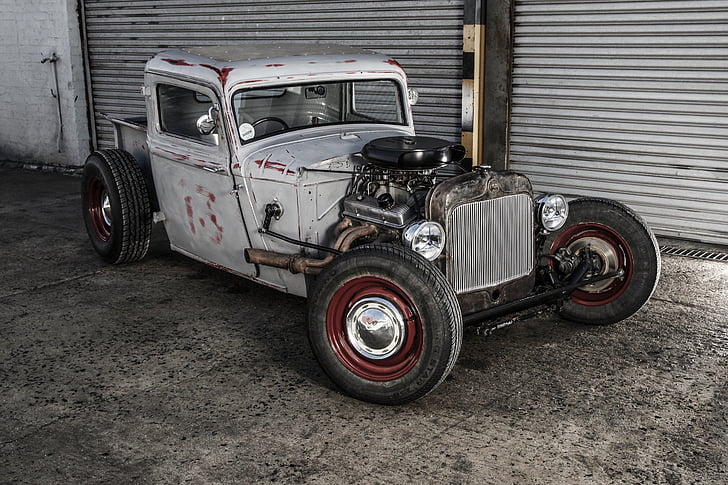 Rat Rods are common among car enthusiasts and collectors alike. For many, a Rat Rod is a showcase of what you can build on the cheap. By purchasing an old rusted out Hot Rod and focusing primarily on the engine performance, the cars are left looking pretty worn and beat up, but still, performs the same way as a high-end sports car.

The earliest rods were built in their owners garage, or backyard. These home-built powerhouses that were ugly, and sneered at by other car enthusiasts when they were first put on the road.

Instead of taking an older car, and completely updating it with new parts to give the classic car shine, older roughed up hot rods were purchase don the cheap and “Mad Maxed” to the point that they didn’t really retain any of the sleek sheen and couture that they had originally been built for. Instead, these cars look like they came straight out of the apocalypse. Rust-colored and borderline scrapped together, they didn’t garner the respect from other car enthusiasts of the time.

“As a response to the high-dollar billet-based street rod trend, budget-limited home-based rod builders looked to the past for inspiration and style, and rat rods were the result. These ‘imperfectly fine’ rods rarely sport paint jobs of any kind, and their owners aren’t scared to drive them. They represent a rebellious attitude, but never take anything too seriously either.“

These rods share a lot of similarities between what they are and traditional hot rods. There are a few differing motives behind reconstructing each of them.

For starters, the traditional hot rod rebuilds are to honor the once road king vehicles. They could be taken from any high-output vehicle of the time and purposed for adding output to the already heavy vehicles.

Rat Rods are different. They do away with any sort of honor in order to give the driver the ability to rebuild the engine that is taken mostly out of humor and for those who love anything extreme.

Time-worn paint and obvious aging helps to bolster what a rat rod should look like. This is typically the first thing someone will point out when they first lay eyes on one.

Typically rat rods are…pretty safe. Again, these vehicles are chopped and slapped together. Major alterations are made to the vehicle to give it the aesthetic that car lovers enjoy. When you go to these lengths, typically there can be a few safety issues that are often overlooked. The image of these vehicles can be terrifying, to say the least. As for rat rods being a death car, well, it depends on who you are talking to and who built it.

With All The New Spray Parks, How Much Water Is El Paso Really Using?